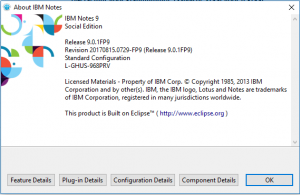 IBM has identified important Notes®/Domino® SPRs to be fixed in the latest Feature Pack release, 9.0.1 Feature Pack 9. All fixes in this Feature Pack have been selected through our Triage process of high impacting customer requested bug fixes and are currently undergoing testing. IBM reserves the right to remove any fix from this targeted release if it does not pass quality engineering tests. Please consider this information to be provisional. Do not base irreversible business decisions on this information until the Feature Pack has been officially released.

The Notes®/Domino® Fix List website on developerWorks will show you the status of this Feature Pack on the Upcoming Releases tab.

Notes®/Domino® 9.0.1 Feature Pack 9 includes new features that benefit our customers. Some of these features have been in development for years and we are excited to make them available. Please refer to the “New Features” section below for more details.

Supersedes
9.0.1 Feature Pack 9 includes all of the content and supersedes the following deliverables:

The JVM was upgraded with the following:

Support for Citrix 7.14
For information on NBP (Notes Browser Plugin), Notes® Client on Linux, or Domino® Server on Linux32 and AIX32, please refer to the 9.0.1 FP8 release notice.

New Features in IBM Domino® 9.0.1 Social Edition Feature Pack 9
The documentation in Knowledgebase will be updated with these new features to coincide with the ship date of 9.0.1 FP9

1) Enhancement Request To Be Able To Increase The Amgr Queue Beyond 100 (SPR #RSTNA4SL7C APARID: LO87242)
The Agent Manager’s Eligible queue is now able to change from the lowest value possible at 100, to 255 which is the highest value possible via an INI AMGRMaxQueue.

2) Databases and views can be opened more quickly in databases that are enabled for transaction logging
It takes less time to open databases and views that are at ODS 52 or higher and enabled for transaction logging. Previously, performance for opening databases or views could be slow in frequently updated databases. This improvement is due to the implementation of less contention with update operations.

3) Restricting the use of mail rules to forward messages to external domains (SPR #JPAR9NEACX APARID: LO81771
You can control the extent to which users can use the Send copy to mail rule to automatically forward received messages to external domains that are not recognized by the mail server. This feature does not affect any forwarding rules that are specified in a user’s Person document or any other type of mail server
forwarding or re-direction.

New Features in IBM® Notes® 9.0.1 Social Edition Feature Pack 9
1) Delegated mail files are refreshed automatically (SPR #RGAU829D4G APARID: LO48407)
If you have delegate access to another user’s mail file, that mail file is refreshed automatically in your Notes® client. To enable this feature, upgrade to the Mail9.ntf template provided with the FP9 Client. No notes.ini setting is required for this feature.

2) Support for recall of messages created with Memo stationary (SPR #JLEN9C9E3G APARID: LO77349)
When message recall is configured on the server, messages created using Memo stationery can now be recalled. To enable this feature, upgrade to the Mail9.ntf template provided with FP9.

4) Improved name lookup in Notes®
Searching by through typeahead or in the ambiguous name dialog, returns the same results as searching by . For example, searching for don smith or smith don returns the same results, including variants such as Donald, Donovan, Smithfield. To enable this feature, upgrade to the pernames.ntf template provided with 9.0.1 FP9 and add the notes.ini setting AllowWildcardLookup=1 to the Notes® 9.0.1 FP9 client.

5) Improved support for Notes® addressing with mobile directory catalogs (SPR #SAPLAK8ANL)
The list of names that is shown when using typeahead to search a mobile directory catalog is now sorted according to the directory catalog configuration. Names in local contacts follow this list. In addition, the Search Directory for option is available at the end of the list to facilitate server lookup. To enable this feature, add the notes.ini setting $TypeAheadShowDircatFirst = 1 to the Notes® 9.0.1 FP9 client.

Fixes contained in this Feature Pack
A plus symbol (+) before the SPR number indicates a fix for a regression bug. A regression bug is an issue that was introduced in a Maintenance Release but did not exist in previous releases of that code stream. For example, a bug that appears in 9.0.1 but did not exist in 9.0.0 is a regression.
If an APAR exists for the corresponding SPR, the APAR number will appear in parentheses next to the SPR number. For example, SPR #nnnnnnnnnn (LO12345).

Notes® Client
+SODY98YHSS (LO75939) – Fixed Client Crashes Due To Low Memory Conditions in the Domparser.Process() Command
+TSAOA9KHCQ (LO88835) – We now ensure that the behavior for the error “Too many recipients. Recipient addresses must total less than 2MB.” is now same for encrypted and non encrypted mails
CSYL9P8N6V (LO82077) – Fixed an issue where users are unable to import an *.ics file while the Notes Client running
DAGL9X6JNU (LO85212) – Fixed a Notes Client crash in Asyncreceivepoll where the session goes away and the session block is freed which causes the crash
FBAIALRD3W (LO92166) – Fix an issue where mail attachments are garbled when downloading mail via IMAP where the attachment was compressed by LZ1 format, but was marked as Huffman encoding
GTONAGLGBT (LO91138) – Fixed an issue where pasting Cyrillic characters from Microsoft Word into Notes gives garbled characters (INI needs to be set to enable this fix = EnableUnicodeCopyPasteFromWord=1)
JABA9U9KWK (LO84063) – Fixed an issue where rescheduling a repeating meeting to Google users takes minutes
JCUS975RGX (LO87001) – Allow attachments to be found by searching for their file name
+JMEAAL7J7V (LO92034) – Fixed an issue where a local group no longer expands
KJEG9QLRHX (LO82689) – Fixed random Notes Client crashes on Citrix
AHSU7YRD7D (LO86096) – Fixed an issue with registering users with certain Chinese, Korean, and Japanese characters
DHUSAJYL62 (LO91713) – Fixed a crash opening a message with a large PNG file
YGAO979JLD (LO75110) – Fixed Notes Client crashes on reply when spell check is enabled
YGAOAFXNKC (LO90922) – Fixed an issue with MIME mail where the attachment cannot be opened after replying/forwarding
JJOEAEGKEX (LO90458) – Fixed a Notes Client crash caused by Notesrichtextnavigator Begininsert in a document that contains Chinese characters
RGAUA4SHWE (LO87236) – Fixed a Domino Designer crash when the option “Use Binary Dxl For Source Control Operations” is unchecked
JKEY9SLK37 (LO83393) – Added support for federating custom views based on $Calendar view from a Notes application/teamroom calendar. Also fixed the issue where calendar entries were not populated in Entries and Notices view causing them not to sync to Traveler.

iNotes
FLIIA5FDJQ (LO87504) – Fixed an HTTP crash on Lockhandle where the fullName field was not found during NAMELookup (where a da.nsf points to an LDAP server with no fullName attribute)
+JJCMAKV3DT (LO91925) – Fixed an issue where “Starts With” Window is not showing when pressing any letter or number key in a view/folder
NNUZAG5A57 (LO91159) – Fixed an issue where the link was not created saving an attachment to Files
+TSAOACN68C (LO89880) – Fixed an issue where iNotes users are unable to open an archive if the local archive exceeds 4GB
DSAS9WWUXB (LO85135) – iNotes – Fixed a problem where an existing attachment is not removed when trying to remove and attach the same filename on the forwarding/replying message if a Forms85.nsf is used on a 9.0.x server.
+MLEYAJ4J3M (LO91444) – Fixed an issue where you are not able to see the “Required” list of invitees when a draft meeting is created in Notes and edited in iNotes

Mail Template (mail9.ntf)
*These SPR’s require FP9 Client and Server in addition to the template
LMAN8JKJF5 (LO78153) – Fixed an issue where a delegated reader can’t open the mailfile when a mail policy has just been applied
BPAL9LSDEE – Delegate with editor access is getting an error in preferences with the field “Prohibit access to folders for users with…”
JLEN9C9E3G (LO77349) – Added the ability to recall messages that are created from stationary
PANNABJLFZ (LO89528) – Fixed an issue where “find a room” displays an empty list for some users when the primary home mail server is not available
+SDOY7JXF87 (LO34305) – New notices were not showing up correctly in the New Notices miniview when policy is set to Display unprocessed meeting notices in the New Notices MiniView
MBOAADMB6X (LO90180) – Fixed a delivery failure report when using the “Reply To All ” for external meeting invitations
MJHAAJMFUR (LO91618) – Fixed an issue where emails cannot display the Reply and Forward icons when emails are auto forwarded by a mail rule
HPUTA3QEUF (LO87753) – Fixed an iCal issue where comments to Outlook users are overwritten when the same user is removed from 2 instances
+*TSAOAAGJ7R (LO89162) – Fixed an issue where the Group Name on the Sendto Field of a Notes mail is removed

XPages
MDOYAKFPE2 – Fixed an XPages issue where dropping an iNotes calendar, the control icons do not display the correct hover help text
BRMD9AZLRJ (LO76784) – Fix a Client hang when trying to add data source to an Xpage
LHEYAKALAH (LO92632) – Fixed form validation not working on an XPage
+LHEYAKBJSQ (LO91943) – Fixed an issue where SSJS editor stops working in an NSF with a managed bean
RGAU9UKP8T (LO84209) – Fixed a Domino Designer freeze issue while developing Xpages
TSAO8D4JQ9 (LO57700) Fixed an Xpages issue where the value of content-length in the HTTP response headers are incorrect

Geplaatst in Beheer, Domino, Notes en getagd met 9.0.1, Domino, Feature Pack, FP9.
We use cookies on our website to give you the most relevant experience by remembering your preferences and repeat visits. By clicking “Accept All”, you consent to the use of ALL the cookies. However, you may visit "Cookie Settings" to provide a controlled consent.
Cookie SettingsAccept All
Manage consent

This website uses cookies to improve your experience while you navigate through the website. Out of these cookies, the cookies that are categorized as necessary are stored on your browser as they are essential for the working of basic functionalities of the website. We also use third-party cookies that help us analyze and understand how you use this website. These cookies will be stored in your browser only with your consent. You also have the option to opt-out of these cookies. But opting out of some of these cookies may have an effect on your browsing experience.
Necessary Altijd ingeschakeld
Necessary cookies are absolutely essential for the website to function properly. This category only includes cookies that ensures basic functionalities and security features of the website. These cookies do not store any personal information.
Non-necessary
Any cookies that may not be particularly necessary for the website to function and is used specifically to collect user personal data via analytics, ads, other embedded contents are termed as non-necessary cookies. It is mandatory to procure user consent prior to running these cookies on your website.
OPSLAAN & ACCEPTEREN