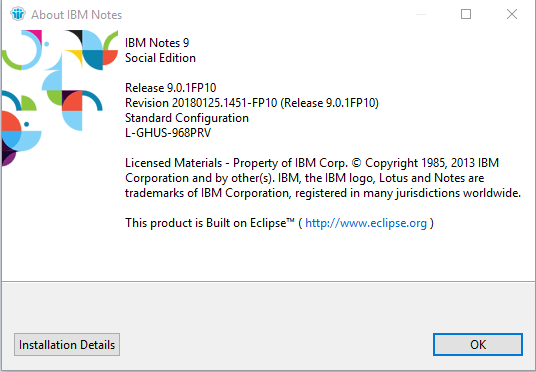 The Notes®/Domino® Fix List website on developerWorks will show you the status of this Feature Pack on the Upcoming Releases tab. This preliminary Release Notice will be updated to include a more descriptive explanation of the problem and fix, where applicable. Also, a link to the technote and regression information will be provided.

Notes®/Domino® 9.0.1 Feature Pack 10 includes new features that benefit our customers. Some of these features have been in development for years and we are excited to make them available. Please refer to the “New Features” section below for more details.

9.0.1 Feature Pack 10 includes all of the content and supersedes the following deliverables:

New Features in IBM Notes/Domino® 9.0.1 Social Edition Feature Pack 10
1) The JVM in Designer is Upgraded to use 1.8 at compile time
With this new upgrade, you can launch Designer client and leverage Java 1.8 compile time features in building applications. For full compatibility, apps compiled in FP10 should be deployed on Notes or Domino FP10 and higher. Java apps may run on Notes/Domino 9.0.1 FP8 and higher as that release upgrade to Java 1.8 runtime. However, Application best practice is to compile with the lowest common denominator to the client/server version deployed.

3) Embedded Sametime Upgraded To 9.0.1 By Default
The default version of the Embedded Sametime in the Notes Client has been upgraded to the 9.0.1 (previously 8.5.2), See important Co-Req in Known Issues above described in  Technote #2012939.

4) The GSKit libraries for are upgraded on all client/server platforms except IBM i to Version 8.0.50.84 (which contains FIPS Certified ICC Version: 8.4.1.0) for both client & server. GSKit is used for FIPs support, AES , 1024+ RSA, and Diffie-Hellman. IBM i will be evaluated for a future release.

6) Add-on Installer for Notes CCM (Connections Content Manager)
An add-on installer for Notes CCM eliminates the need for special hotfixes but does require 9.0.1 FP10. This optional add-on allows a Notes client to show Libraries from CCM for use with email and calendar.
Note: The Notes CCM now supports the Dutch language in addition to previously supported languages For more details on CCM, see https://www.ibm.com/us-en/marketplace/connections-content-management.

Fixes contained in this Feature Pack

What follows is a subset of high impacting bug fixes addressed in this feature pack.  For the full list of fixes, visit  the fixes by release view  for the description of each fix in this Fix Pack, including platform specific information.
A plus symbol (+) before the SPR number indicates a fix for a regression bug. A regression bug is an issue that was introduced in a Maintenance Release but did not exist in previous releases of that code stream. For example, a bug that appears in 9.0.1 but did not exist in 9.0.0 is a regression.
If an APAR exists for the corresponding SPR, the APAR number will appear in parentheses next to the SPR number. For example, SPR #nnnnnnnnnn (LO12345).

iNotes
JVEKAPWDR8 (LO92793 ) – Fixed an issue in iNotes when forwarding an email from Google Chrome a lot of white space is added between the new and the forwarded document
+KRAUANKM6K (LO92572) – Fixed an iNotes issue where users are unable to attach two or more files using the Send Function.  This was a regression introduced in 9.0.1 FP7
SDOY9LFER6 (LO81030) – Fix an iNotes issue that fails to open attachment on forwarding or replying message on IE with iNoes ActiveX file attachment utility