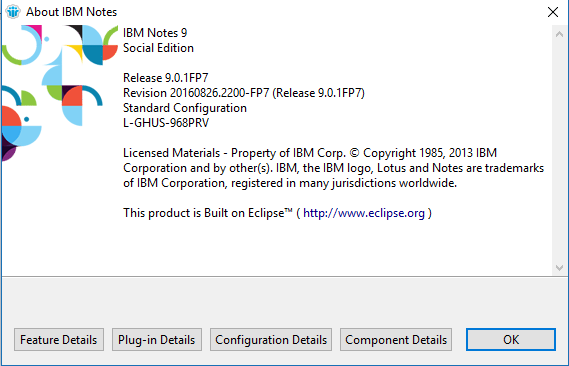 9.0.1 Fix Pack 7 is a collection of new features and low-risk, high-impact fixes to help customers safely avoid known issues. IBM strongly recommends that customers running Notes/Domino 9.0.1x upgrade to this latest Fix Pack since it adds new features and addresses a small percentage of defects that impact the broadest set of customers. Fix Packs are released periodically to provide a greater level of stability for customer environments. They go through the same level of fix, regression and interoperability testing that occurs with Maintenance Releases. Fix Packs are always cumulative and contain all of the fixes from previous ones. All Fix Packs are language independent and may be applied on any language version of Notes/Domino 9.0.1x.

Supersedes
9.0.1 Fix Pack 7 includes all of the content and supersedes the following deliverables:

If running IBM Traveler or IBM mail support for Microsoft Outlook on Linux 64-bit, you should upgrade those products to the latest releases available prior to upgrading to Domino 9.0.1 FP7. See technote 1990034 for details.

SPR XXLI9RNB7U – Windows Domino Server: JVM version is reverted to 9.0.1 gold’s version when un-installing/downgrading from a 9.0.1 Fix Pack to a prior Fix Pack. This will not impact most customers, as downgrading to a prior fix pack is not a common operation. This issue also does not affect future fix pack upgrades. DETAILS: On Windows, the Domino server installer gives you an option to downgrade to either a prior Fix Pack level or to the gold release. If customers want to downgrade to an earlier Fix Pack level, it is recommended that you un-install the Fix Pack, which will leave the server at 9.0.1 gold, then proceed with the Fix Pack install of your choice. This will ensure the correct JVM level is installed. This issue is documented in technote 1980538.

Decision to upgrade
Customers unable to upgrade to later Releases should install Fix Packs to benefit from later fixes made to the product. By providing a small number of fixes, customers are able to accept fewer code changes with lower risk, allowing them to “patch” an older Maintenance Release until a more extensive upgrade to the current Release is possible.

Fixes contained in this Fix Pack
A plus symbol (+) before the SPR number indicates a fix for a regression bug. A regression bug is an issue that was introduced in a Maintenance Release but did not exist in previous releases of that code stream. For example, a bug that appears in 9.0.1 but did not exist in 9.0.0 is a regression.
If an APAR exists for the corresponding SPR, the APAR number will appear in parentheses next to the SPR number. For example, SPR #nnnnnnnnnn (LO12345).

What follows is a subset of the most important issues addressed in this fix pack. For the full list of fixes, visit the fixes by release view for the description of each fix in this Fix Pack, including platform specific information.

GTONAABGV7 (LO89121) – Client: Fixed a Client crash issue when setting up IMAP
SFIK86WR26 (LO52999) – Fixed an issue where launched programs do not get focus (technote 1593140)
SSSS9GACRK (LO80115) – Allow “Advanced Menus” option to be controlled via Policy (technote 1990186)
+RGAU9XUMQP (LO85491) – Fixed an issue that would cause corrupted attachments when using the Notes API to export data. This was reproducible with the Archiving-API sample code from the API Toolkit. This was a regression in 9.0.1
TMDS8U5R2K (LO69308) – Fixed a Notes Client delay issue when performing a copy/paste from IE using a proxy server
RREN9DEFWW (LO77885) – Enable location roaming for roaming users

Any cookies that may not be particularly necessary for the website to function and is used specifically to collect user personal data via analytics, ads, other embedded contents are termed as non-necessary cookies. It is mandatory to procure user consent prior to running these cookies on your website.