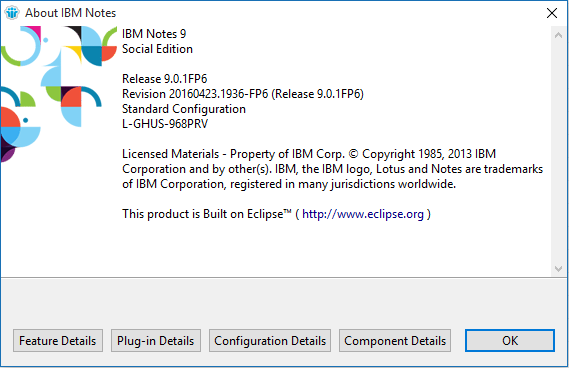 9.0.1 Fix pack 6 is a collection of low-risk, high-impact fixes to help customers safely avoid known issues. IBM strongly recommends that customers running Notes/Domino 9.0.1x upgrade to this latest Fix Pack since it addresses a small percentage of defects that impact the broadest set of customers. Fix Packs are released periodically between Maintenance Releases to provide a greater level of stability for customer environments. They go through the same level of fix, regression and interoperability testing that occurs with Maintenance Releases. Fix Packs are always cumulative and contain all of the fixes from previous ones. All Fix Packs are language independent and may be applied on any language version of Notes/Domino 9.0.1x.

Supersedes
9.0.1 Fix pack 6 includes all of the content and supersedes the following deliverables:

SPR XXLI9RNB7U – Windows Domino Server: JVM version is reverted to 9.0.1 gold’s version when un-installing/downgrading from 9.0.1 Fix Pack 4 to a prior Fix Pack. This will not impact most customers, as downgrading to a prior fix pack is not a common operation. This issue also does not affect future fix pack upgrades. DETAILS: On Windows, the Domino server installer gives you an option to downgrade to either a prior Fix Pack level or to the gold release. If customers want to downgrade to an earlier Fix Pack level, it is recommended that you un-install the Fix Pack, which will leave the server at 9.0.1 Gold, then proceed with the Fix Pack install of your choice. This will ensure the correct JVM level is installed.

Decision to upgrade
Customers unable to upgrade to later Releases should install Fix Packs to benefit from later fixes made to the product. By providing a small number of fixes, customers are able to accept fewer code changes with lower risk, allowing them to “patch” an older Maintenance Release until a more extensive upgrade to the current Release is possible.

Fixes contained in this Fix Pack
A plus symbol (+) before the SPR number indicates a fix for a regression bug. A regression bug is an issue that was introduced in a Maintenance Release but did not exist in previous releases of that code stream. For example, a bug that appears in 9.0.1 but did not exist in 9.0.0 is a regression.
If an APAR exists for the corresponding SPR, the APAR number will appear in parentheses next to the SPR number. For example, SPR #nnnnnnnnnn (LO12345).

What follows is a subset of the most important issues addressed in this fix pack. For the full list of fixes, visit the fixes by release view for the description of each fix in this Fix Pack, including platform specific information.